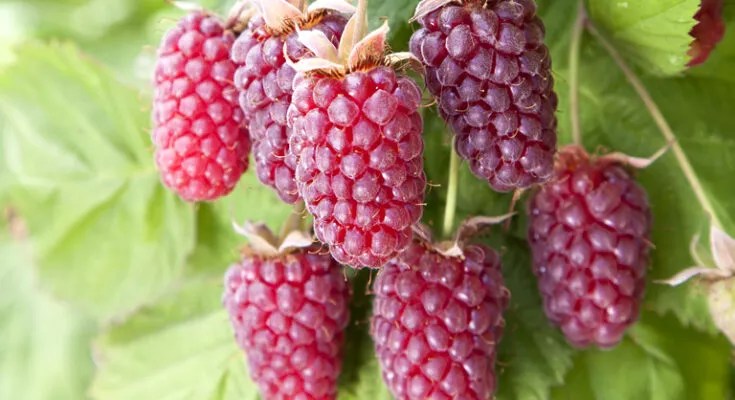 A cross between a raspberry and a blackberry, a loganberry is a delightful plant to grow. Thornless and robust, loganberries are bigger than their parent fruits and turn a deep, juicy red when ripe. In a single season, the loganberry can send out dozens of canes that can reach up to 20 feet in length and need to be heavily pruned to keep in shape and under control. Its leaves are bright green and large and look very similar in shape to that of the raspberry.

Loganberry fruit have a heavy, white central core, and so the fruit is best removed from it when preparing to eat. The long berries separate easily from it when the fruit is fully ripe. Under-ripe fruit is slightly bitter, however. If allowed to fully mature, the fruit becomes sweeter, juicier and an even deeper red, almost purple in colour.

This is the growing base of the loganberry plant, showing the cropped canes and the two being allowed the grow: the new one for this year and last year’s fruiting cane.

Where to Plant Loganberry

Like all fruiting canes and plants, it is best to purchase and plant out your loganberry in the autumn. Loganberries can be grown inside a greenhouse or outside. While they apparently grow well in USDA zones 5–10, my only personal experience is of growing them inside an unheated greenhouse in Scotland, where they enjoy a longer growing season. As the fruits ripen unevenly, they have an exceptionally long fruiting season when kept in a greenhouse.

As a greenhouse fruiting plant, they are ideal, as it is very easy to train a single cane to grow horizontally along the eaves of a sloping roofed glasshouse. In this way, when it fruits, the loganberries are easily within reach for picking, yet out of the way of other greenhouse plants.

Loganberry flowers form on one-year-old growth. So it is best to allow one new cane to develop each year to grow alongside the cane you allowed to develop the previous year, cutting down the first cane when fruiting is over in the autumn. In this way, you will always ensure you have a healthy, fruiting cane from which to harvest the berries for use in the kitchen.

The loganberry vine grows along the full length of the greenhouse.

You cannot grow the seeds of the loganberry and expect to produce a plant similar to its parent, because the loganberry (Rubus loganobaccus) is a hybrid cross between blackberry (Rubis ursinus) and raspberry (Rubus idaeus). Therefore, you have to reproduce the plant by cuttings. It can be done by layering or by taking woody cuttings. The easiest way by far, however, is to point a growing tip into either a jar of water or a pot of compost.

Like the blackberry, this triggers a rooting mechanism, and the tip will quickly develop roots and send out new shoots. The whole of the tip can then be cut off from the parent plant, and you have a brand new loganberry bush to give away to friends or neighbours or to plant elsewhere in your garden (though most people would only want to have one loganberry bush, as they are big, self-pollinating and produce pounds and pounds of fruit annually).

Loganberry fruits inside a greenhouse.

How to Grow Loganberry in the Garden

Choose a sunny and sheltered position for your loganberry, in well-drained soil. Your young loganberry bush should flower in its second year as the fruits develop on woody, one-year-old canes.

Decide how to you want to grow your loganberry plant. If you have the space, offer its canes some kind of horizontal support. You can tie the canes onto a wire firmly attached between two fence-posts and train the canes along it.

Left to its own devices, a single loganberry bush will produce up to 10 canes (vines), each capable of growing 6 feet up in the air before sweeping downwards in a wide arc. Each cane can easily grow 10 feet or more in a single season. This makes the whole plant a bit unruly. So it is better at the offset to decide what shape you want your plant to be and prune unwanted canes off as you see them grow. One single cane, properly supported and netted to protect it from birds, can provide more than enough loganberries for you and your family all summer.

In my experience, there are none. A healthier and more robust plant is hard to find. Mine has never been attacked by anything. Some years, aphids are present in the greenhouse, but while they are attracted to the tomatoes and other greenhouse plants, they have left the loganberry well alone.

As a side note, since I started growing marigolds in the greenhouse, any aphid attacks on other plants have been minimal, while the marigolds themselves are covered with the sticky deposits left behind by green and whitefly. This is a handy tip for anyone plagued by greenhouse aphids.

If you are a first-time loganberry grower, you could be forgiven to think that the fruits are ready when they turn red, like raspberries. True to their blackberry parentage, however, their sweetness doesn’t really come to the fore until their color has darkened. Try to resist picking them before they turn a purple shade, as they are slightly bitter up until then.

Loganberries can be used in the making of jams, tarts, sauces, desserts or wines. Any recipe you have using either raspberries or blackberries can be interchangeable with loganberries for a delicious alternative flavor. The only drawback in its preparation is having to dispose of its thicker core. While still being edible, the core changes the texture of a traditional fruit dessert and is best removed. On the plus side, the fruits are so big that you need far fewer to make up a dish.

Loganberries can also be eaten raw, and its taste is sweet and very similar to both of its parent fruits. Red or purple, loganberries (with core intact) are absolutely delicious served with ice cream! 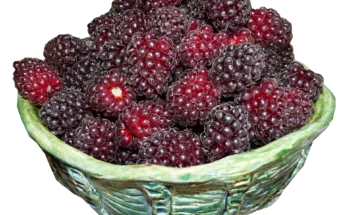